Fatal Tricycle Accident at Waters Upton
Dying, Not Drunk
A fatal tricycle accident, under most painful circumstances, occurred in the village of Waters Upton, on Tuesday night. A carpenter named Samuel Dodd had been out with a companion, William Matthews, both riding tricycles. On their way they called at the Buck’s Head Inn, Long Lane, after which they returned towards home, Matthews and Dodd parting company at Crudgington Road, the latter proceeding on his way to his lodgings. Later on, Dodd was discovered on the side the road at Waters Upton, with his tricycle on the top of him, and in a partially insensible condition. Matthews and others, including a police-officer, subsequently came up, and arrived at the conclusion that Dodd was drunk. The unfortunate man was, under this impression, left where he fell, and it was not until the following morning that it was found he had sustained serious injuries, when he was removed to the house of Matthews, where he died. 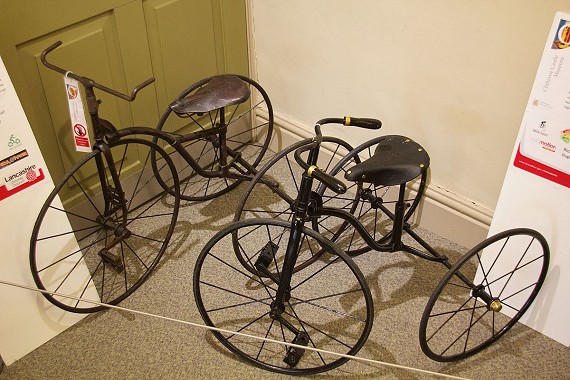 So began a detailed report in the Wellington Journal of 15 August 1891 (page 6), on the tragic death of Samuel Dodd three days before. Samuel was not a resident of Waters Upton. He was born at Wrockwardine in Shropshire and baptised there on 18 December 1859 and by 1871 his family had moved to his father’s native parish of Bolas Magna where they remained, with Sam ‘flying the nest’ some time during his 20s to move into lodgings. But Samuel was clearly well known in Waters Upton, his untimely demise took place there, and the events surrounding his death involved several of the parish’s inhabitants. We’re going to get to know some of those people in this story, starting with Samuel’s drinking (and tricycling) buddy.

When the census was taken earlier in 1891, William Matthews was enumerated as an unmarried, 43-year-old sawyer living alone at Waters Upton. I have found no record of his baptism in the relevant register but William’s first appearance on a census schedule, in 1851, shows that he was the son of William Matthews senior, a cordwainer (or shoe maker), and Ann (née Hobson), and born about 1848. His birth was registered in the first quarter of 1848 at Wellington.

By 1861 William junior, age 13, was a shoe maker like his father, but ten years on in 1871 he was enumerated as an agricultural labourer. Over the course of the next decade he adopted another type of employment, one which he seems to have settled on, as the 1881 census (like that of 1891) shows he was working as a sawyer. He seems to have liked a drop of beer too, an aspect of his life that I will explore in more detail another time.

The next resident of Waters Upton to appear in the Wellington Journal’s report is someone else to whom I will have to return in another article. For now, I will simply say that William Abraham Richard Ball appeared on the 1891 census as a 42-year-old tailor, living with his Waters Upton-born wife and children.

An inquest on the body was held at the house of Mr. W. A. R. Ball, Waters Upton, on Thursday morning, before J. V. T. Lander, Esq., coroner, and a jury of which Mr. J. Cornes was foreman.—The first witness called was Thomas Dodd, who deposed: l am a gardener, and live at Bolas Heath. The body which the jury have just viewed is that of my son, Samuel Dodd, who was a carpenter, and 31 years of age. He was living in lodgings at Long Waste. I last saw him alive on Monday morning. Yesterday morning I was sent for to see him at Waters Upton. I came, and found him dead.
I saw Matthews, who said he and the deceased had gone out with their tricycles after leaving work, and went to Long Waste. Deceased stayed to get his tea at his lodgings, and then they both rode to the Buck’s Head Inn, Long Lane. After a time they left together on their way to Waters Upton. Matthews said deceased rode in front of him, and that he thought he had gone to my house at Bolas. He further added that he saw no more of him that night.
Matthews also stated that on his getting up next morning he saw the deceased in his pigsty, and that he was very sorry for it; if he had known what was the matter he should have taken him into his house. I asked Matthews what had killed my son, and he said he did not know. Matthews said they had had no beer except at the Buck’s Head, and that the deceased was not drunk.—[Questioned by] the Foreman: Matthews said they had worked the usual time, and afterwards went to the Buck’s Head. 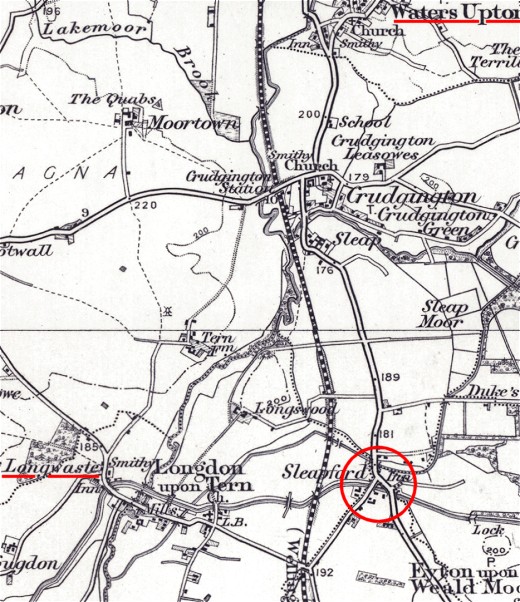 Map showing locations visited by Samuel Dodd on the evening before he died, including Long Waste, the Buck’s Head at Long Lane (centre of circle, between the fork in the road and the canal), and Waters Upton.

J Cornes, incidentally, was almost certainly Joseph Cornes of nearby Crudgington in the parish of Ercall Magna. Although he never lived within the parish of Waters Upton (as far as I know), he was buried there (in 1897); his gravestone and a little more information about him can be found on his Memorial Inscription page.

. . . was the next to give evidence. Although he was recorded (with his wife and three young children) as a resident of Waters Upton on the 1891 census, he had not lived there for long, and would not remain there for much longer either. Born ‘next door’ in the parish of Ercall Magna in 1857, Samuel still had his abode there when he married Rosa Fanny Mary Tanswell at nearby Wellington (where the bride lived, at Street Lane) on 9 September 1884. He was a joiner at that time, and a joiner still in 1891; the fact that his and Rosa’s eldest child Ellen was then, according to the census, 5 years old and born in Waters Upton suggests that the couple settled there very soon after they wed. Their other, younger offspring Emily (3) and Frederick (1) were also born in Waters Upton.

By 1901 however the Owens were living at Walton in Samuel’s native parish, with Samuel’s occupation recorded in the census as “Joiner (Carpenters)”. The same census shows that the next child born into the family after Frederick (aged 11) was 8 year old Rosa junior, at Waters Upton. The births of younger sons Owen, Harold and Charles however, aged 6, 3 and 1 respectively, all took place at Walton, suggesting that they relocated to that hamlet sometime around 1893. With four of the aforementioned children plus another addition, John, the Owen family was still at Walton in 1911. Samuel’s death was registered at Wellington in the last quarter of 1915; he was 57.

Samuel Owen deposed: l am a joiner, and live Waters Upton. On Tuesday night I left home about nine o’clock and went to the Swan Inn. I was returning home by the Post Office when I saw Matthews talking to the stationmaster, Mr. Perceval. I walked up the road with them. Matthews got off his tricycle and pushed it up the bank. At the top of the bank Matthews and the stationmaster stopped talking. I took Matthews’s tricycle and pushed it down the road, and as I came past Miss Walker’s I saw something on the right-hand side of the road, on the footpath, and I went to see what it was.
I found the deceased on the ground, and a tricycle on top of him. The tricycle was bent, and the wheel would not turn. I picked up the deceased and asked if he was hurt, and he replied, “None of your old tricks.” I told him the machine was broken, and he said, “Bother,” or something of that sort. He could walk with my assistance. I helped him to the wall and left him by it. I went to look for his hat, and when I came back I found he had been vomiting. I did not think he was hurt, but that he was drunk.
I went back to Mr. Perceval and Matthews and told them that “Sammy had had a spill.” They asked if deceased was hurt, and I said I thought the tricycle was smashed up more than Sam. Matthews then came with me to where the deceased had fallen from the wall, and was then in a sitting position against the wall. I asked deceased if he was going home, and he said, “Wait five minutes, and then I’ll come.” Police-constable Lee then arrived, and picked the deceased up, and said he thought he was drunk. I tried again to start him off home, but still he asked to be allowed to stop. Matthews was there, but I heard no mention of deceased’s going to Matthews’s house.
I did not know that deceased had been out with Matthews. Deceased made no complaint. I thought he was simply drunk, and that he had run against the kerbstone and upset the machine. Matthews had had beer, but he was not drunk, and seemed capable of taking care of himself. I left him with the deceased, who was then standing against the wall, and Matthews was talking to him. I heard Matthews tell him he had better go home. I quite thought he was starting home when I left. I have seen him before when has been in beer, and have started him home several nights. 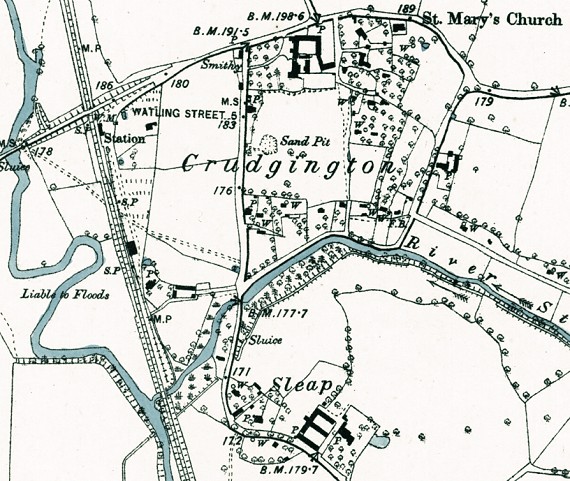 Who was Mr ‘Perceval’ (Percival), the stationmaster? The only other trace of him I found when I searched the British Newspaper Archive was a report in 1889 in which it was mentioned that he sent flowers to the funeral of John Bertie Davies, who had been employed at the station as a telegraph clerk (Wellington Journal, 7 September 1889, page 8). There was a Mr Herbert F Percival living in Waters Upton in 1891, but he was a farmer. The nearby railway station – with its stationmaster’s house – was at Crudgington, situated south of Waters Upton and in the parish of Ercall Magna (the track and the station are now long gone, but the house and a railway bridge remain).

The entry for High Ercall in the 1891 Kelly’s Directory provided me with the answer: the name of the Crudgington stationmaster was actually James Purcell (which reinforces the old saying that you shouldn’t believe everything you read in the papers)! The Wellington Journal did at least get his name right in their edition of 31 October 1891 when they included “Mr. Purcell, the popular and obliging stationmaster at Crudgington” among those who attended a concert at Crudgington. The concert had been organised at James Purcell’s request, to raise money for the Widows’ and Orphans’ Fund of the Great Western Railway. Attendees included Waters Upton residents John Bayley Davies, the rector – and the aforementioned Mr Percival, the farmer.

James Purcell, a Railway Station Master born at Cox Bank in Audlem, Cheshire, was enumerated on the 1891 census at Crudgington. He appears to have knocked a few years off his age for that census – although he said he was 34, in 1881 when he was a stationmaster at Adderley near Market Drayton, he was 27. We get to the truth by going back another ten years to the 1881 census, when James was a railway porter living with his parents and siblings in the place of his birth and his age was given as 19: a son of shoemaker James Purcell and his wife Charlotte, née Worrall, James junior was baptised at Audlem on 6 July 1851.

James’s employment took him to Shrewsbury in 1892, a report in the Wellington Journal of 26 November that year noting that: “Mr. Purcell has been stationmaster at Crudgington for upwards of 12 years [10 years at most in reality!], and his leaving seems to be generally regretted throughout the district.” James Purcell, 44, was still living in Shrewsbury when the 1901 census was taken, and was employed as a railway clerk (or more specifically, as a “Railway Canvasser”). He remained in Shrewsbury and in that employment until his death on 26 March 1912.