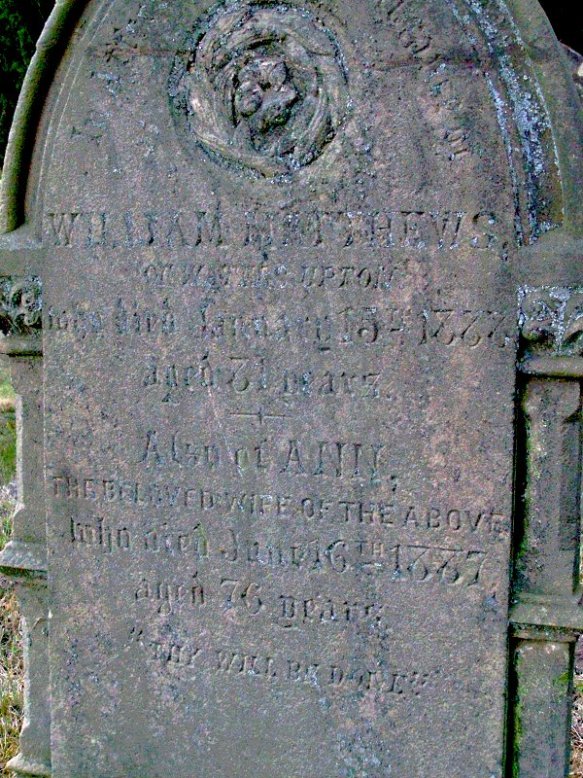 In
Affectionate Remembrance
of
JOHN MATTHEWS
son of William & Ann Matthews
of Waters Upton, who died
Dec. 22nd 1868
Aged 22 years.
You that are young prepare to die,
I was young though here I lie.
Repent in time and do not delay,
For I was suddenly called away.

(The last four lines above were kindly provided by Gordon Fulton, who photographed this stone back in 1985 when it was more legible.)

William Matthews was baptised at Waters Upton on 12 Oct 1806, son of John Matthews and his wife Sarah (confirmed by Gordon Fulton as the John Matthews and Sarah Tudor who married at Waters Upton on 28 Mar 1796). The 1851 census shows William, aged 45, working as a cordwainer (shoe maker), with wife Ann (41, born at Crudgington) and six children, all born at Waters Upton. William and Ann’s final appearance on a census was in 1881. William, 75, was still working as a shoe maker. Son William Matthews, 33, a sawyer, was also at home with his parents.

William and Ann’s son John was baptised at Waters Upton on 7 Mar 1846 (my thanks to Gordon Fulton for the baptism record.) Aged just 22 when he passed away, he predeceased his parents by around 20 years.